Finca La Eperanza is high in the mountains near Gigante, in Huila. The drive up there was an interesting experience and when it rained while we were on the farm we wondered how we would get down, but our driver Javier once again got us safely home. See  video of the road trip up here:

Once we got there, we actually had to walk up a narrow path for about 500m before we actually got to the farm that is almost 2000 masl.

Edilfonso was a passionate coffee farmer we were keen to meet him. We still have some of his microlot coffee left and we bought him some of his own coffee to taste (which we left there) – see it in his left hand while he greets from Quaffer in he Coffee collective shirt. 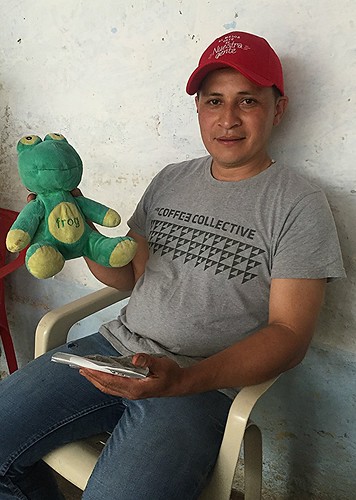 He inherited the farm from his Dad. His wife drew the map below, but he only really has map for reference, since he knows where every thing is planted: 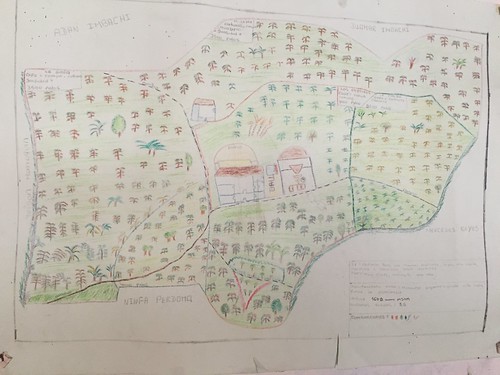 All planning is in his head, he has Caturra, Typica and Columbia (which was the last variety he planted). He wants to plant more Caturra.

The farm is  a family affair. He works as a team with his wife who is a pillar. She is very fast picking and sorting. He and his wife do most of the picking and processing, with a little help from his one brother. He does also hire 3-4 other pickers when needed. He has another brother, that he and his brother bought out, and he wants to buy his other brother out as soon as he has paid off the other brother. He feels he and his wife and family (he has three girls) can cope with the farm of 4 hectors, which he believes is big enough. His children get rewarded for helping when they want, and he and his wife love them being involved. 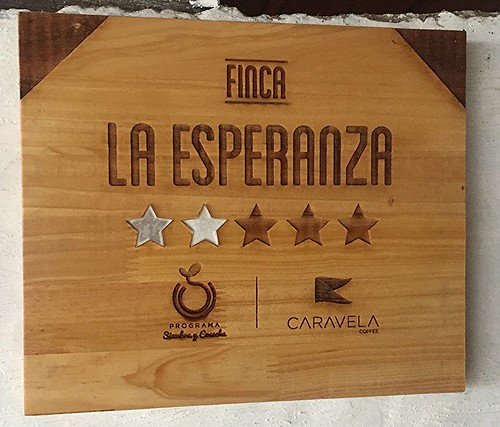 The Caravela microlot project has helped him as an incentive to improve the farm and also his family. His goal is to always have microlot lots from his crop, and hope to achieve this by being very specific and accurate in his process and hopes will always produce good coffee.

When then went to take a look at his Beneficiario and the drying beds and he had a chat with Johanna who is the QC for Caravela in Gigante. 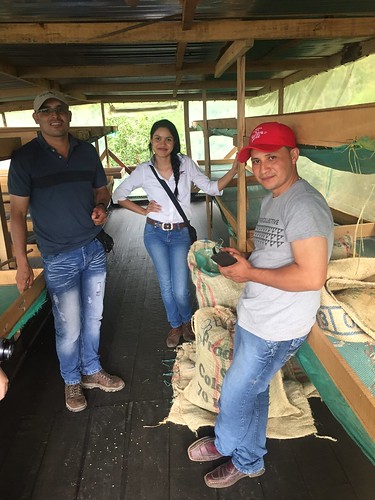 She told me that in blind cupping he normally recognizes his coffee, which is very impressive. He currently does 5 days pre-dry (shade drying, straight after washing), then 15-30 dry to dry thereafter, until he knows the moisture level is around 11%. I noticed his drying racks have plastic under the drying screens. They check the drying coffee for bora / broca and the bad coffees fall through to the plastics collection, which they then sell as pesa (over grade coffee,  or C Grade).

Interesting to note is that Edilfonso is on of the producers that are consistently producing high grade parchment and so for him and other producers like him Caravela actually provide grain pro bags to store the parchment in, and deliver to the QC. Caravela believes that these assists in retaining the quality coffee the coffee.

We then went to take a look at the de-pulper and the washing and fermentation tanks. They de-pulp and then ferment 24 to 36. He checks at 24 (like the pic) and may the add a few hours. He checks by removing a sample then washes it. If there is only parchment then removes the coffee for drying otherwise he extends the fermentation.

Pana view from the top of the Benefecio 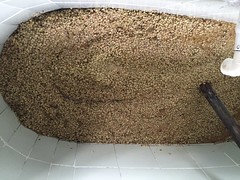 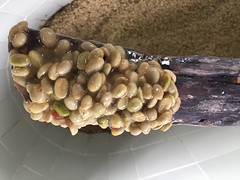 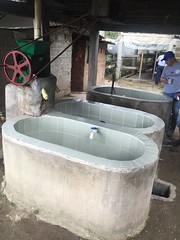 Edilfonso used to be a picker before. He is now 38 and he has been working with Caravela for 6 years, the premiums he received from them sustain his life and farm and he is able to live there comfortably.

The wife has written two poems to coffee which you can listen to/watch the second one here or view the words to both below:

The poems are attach to the walls near the coffee: 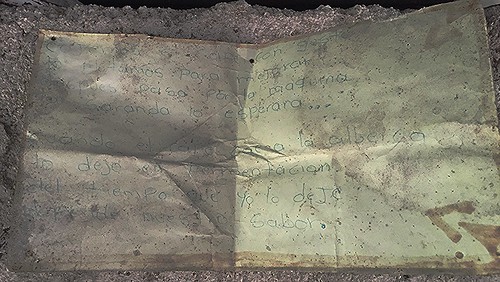 When then went to take a look at the Caturra and Bourbon nursery. 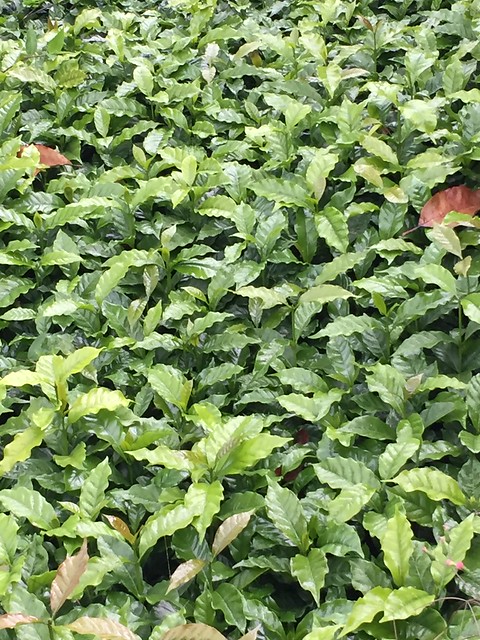 We went to the end of the rainbow and found microlot coffee. 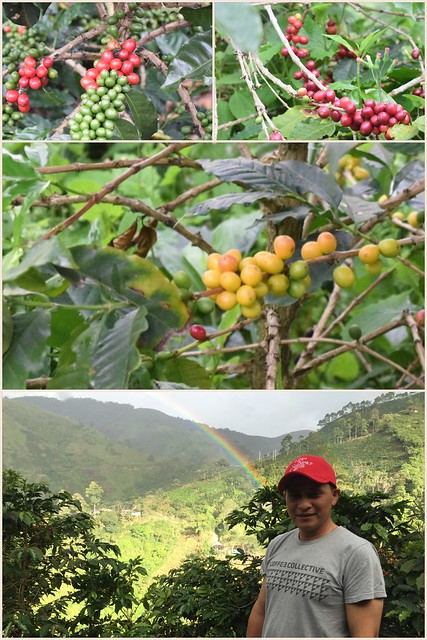 They roast their own coffee for consumption in an oven 15 mins. Below a pic of the roasting oven: 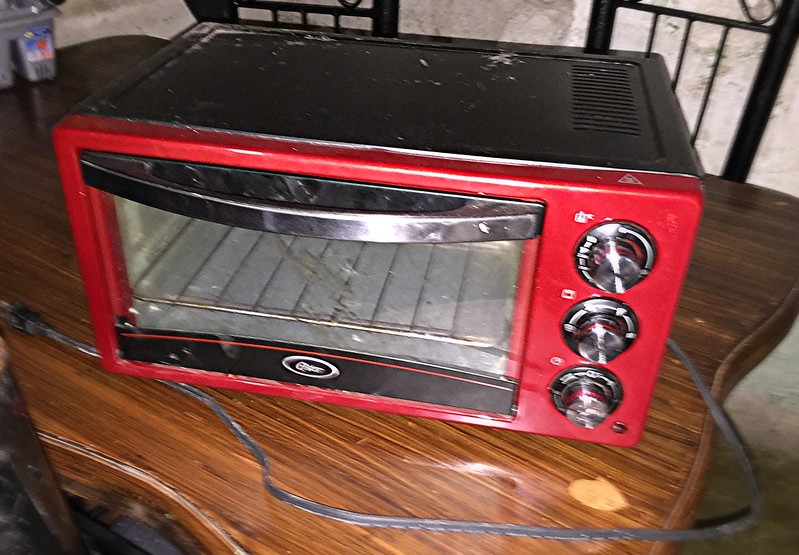 It started raining so we have another great cup of coffee and chatted some more about their lives. They go to town on Sunday’s when they go to church, then they go to supermarket and buy ice cream for the girls. The Girls go from the farm to the road to go to school with transport that all the farmers pay for the school kids to take to school. 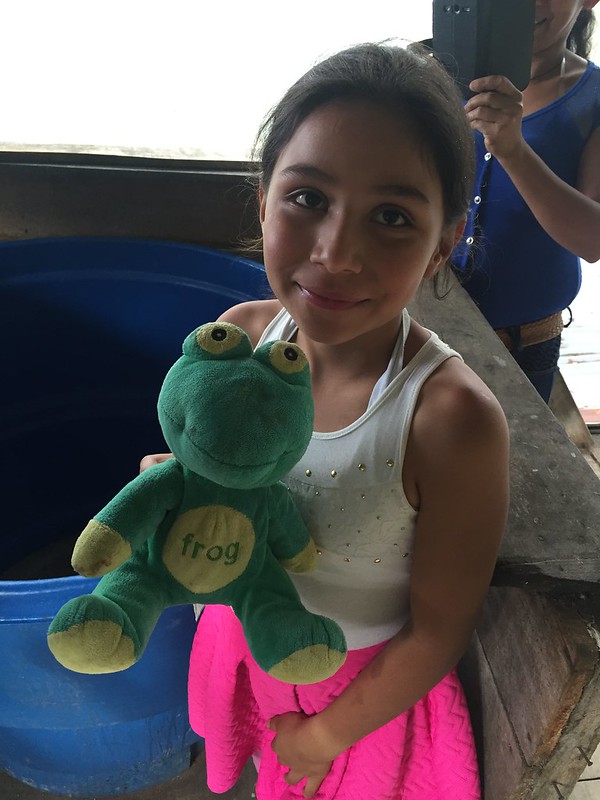 He got money to buy the farm by making the contract with Dad to buy farm and use produce to pay back. Three brothers bought it then one wanted to leave so they bought him out. There are only four hectares that the brother shares but may eventually also leave. Today per hectre a new farm would be around 20 million pesos in this area.

When he heard about Caravela they were not operating in Gigante yet. He drove through to La Plata to sell his coffee, since he heard he could be paid well. He took 4 tonnes but a lot was rejected. They then thought perhaps it was not a good idea to sell  to Virmax / now Caravela. Then they started to receive the premiums and decided to try again. Then with their help he was able to increase his quality, so he worked hard to do what they asked. Caravela pay base then extra for scoring more in the cup. He also found out that Virmax/Caravela pay much more than Nestle and give additional premiums.

The Government agents come to promote Castillo. The banks will not lend them money unless they have Castillo on the farm so they are forced to plant it. He has planted it and the results are poor so he is planning to remove it.

Other Plans: he wants to plant more Caturra and Bourbon. And also to separate these varieties into lots. At the moment they just concentrate on ripeness not varieties, so they combine varieties#FarmVist.

What a wonderful visit, and after many coffees and so courage we made our way down to the car and then down the mountain to Gigante.